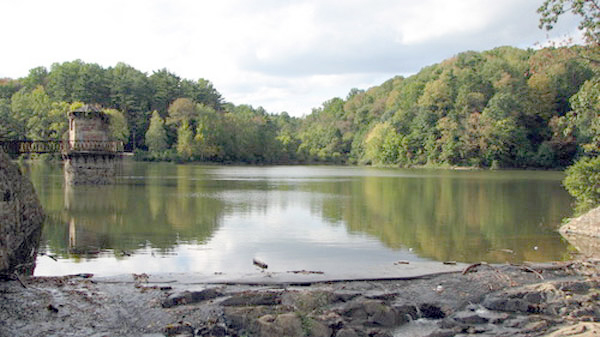 The Reading Area Water Authority was created in 1994 but its roots go back nearly two centuries. The first public supply of water delivered in Reading was introduced in 1821 by the Reading Water Company. The water works then consisted of the Hampden Springs, a 2 1/2 inch earthenware pipe leading to a small covered basin near Eleventh and Court Streets, and wooden pipes in the streets for distributing the water. As the population of the town increases and additional sources of water supply were introduced, all of these earlier pipes were replaced with larger pipes.

In 1865, the City of Reading purchased the entire works of the water company for $300,000. It consisted of the Hampden Springs, Bernhart, Egelman and Mineral Spring gravity supplies; 3 basins at Eleventh and Penn Streets; 12 miles of cast iron pipes; 39 fire hydrants, 110 street valves with wooden boxes; and 147 acres of land with improvements.

At present, the water supply for the City of Reading is obtained mainly from Lake Ontelaunee. Lake Ontelaunee was constructed in 1926 and is located about eight (8) miles north of the City. Lake Ontelaunee has a water surface area of 1,082 acres and a capacity of 3.88 billion gallons.

The Maidencreek Filter Plant was constructed in 1935. Additions were made in 1956 and major renovations were made in 1994. The plant capacity is 40 million gallons per day of treated water. The Centrifuge Plant is located adjacent to the Filter Plant. Its function is to separate sludge solids from its liquid form for disposal at the water authority’s landfill.

The treated water from the Maidencreek Filter Plant flows by gravity through four (4) 30-inch siphons. These pipes are laid under Willow Creek to a 20 Million clear water storage basin, then to the Maidencreek Pumping Station.

The Maidencreek Pumping Station capacity is 25 million gallons per day. Its average daily pumping rate is 15.3 million gallons. The water is pumped to the City’s distribution systems by three (3) force mains; a 36 inch, 30 inch and 24 inch diameter water mains.

The Water Authority was established on May 20, 1994, and is a body corporate and politic, organized under the Municipal Authorities act. The Authority has been incorporated pursuant to appropriate action of the governing body of the City of Reading, Berks County, Pennsylvania (the “City”) and exists under and is governed by the Act. The Authority has the power to, among other things, acquire, hold, construct, improve, maintain and operate water filtration plants, trunk lines and water distribution systems.

The Reading Area Water Authority is proud to serve the City of Reading by operating and maintaining the city’s water system.

Click HERE to View or Pay your Bill or request certification